You can manage your notification subscription by clicking on the icon

To start receiving timely alerts, as shown below click on the Green “lock” icon next to the address bar 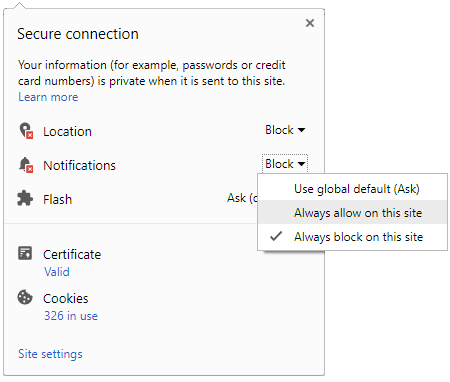 ITC Sonar is one of the luxurious five-star hotels in the ‘City of Joy’ – Kolkata. The distinctly modern yet sleek architecture that offers a contrasting essence to the heritage of Calcutta is without doubt one of the most striking landmarks of the city.

ITC Sonar is located en route to the airport and is just opposite the famous Science City. The luxury hotel is a tribute to the historical city and celebrates its culture, love and compassion in more than one way. ITC Sonar has 238 luxurious rooms along with restaurants that are known to offer delectable delights specially prepared by the master chefs.

The hotel is the first hotel in the world to be registered under the United Nations Framework Convention on Climate Change (UNFCCC) for Carbon Emission Reductions. In the hotel premises, guests can stroll in the beautifully landscaped gardens where the gentle water bodies with the water lilies brings alive the essence of rural Bengal.

The interior decor of the hotel has also paid tribute to the glorious days of the Pala dynasty in Bengal by creating replica statues which are kept in the lobby and the corridors.

Hotel ITC Sonar has innumerable services and facilities that make staying at this grand hotel a pleasure. Among the numerous facilities valuable for the guests, some of them are -

Peshawri is a highly acclaimed restaurant that serves the flavours and tastes of the North West Frontier. Having an ambience that is reminiscent of the cold dessert terrain of the West Indian regions, the delicacies here are prepared in the traditional clay tandoors. Dum Pukht, on the other hand, brings the grand cuisines of India to the fore. The dishes at Dum Pukht are prepared slowly using handpicked spices. Dum Pukht is Asia’s first recipient of the Golden Fork Award.

Pan Asian serves the finest Asian cuisine and brings in the flavours of Japan, China, Mongolia, Korea, Singapore, Thailand, Indonesia, Burma and Vietnam under the same roof. From Korean bar-be-cues to Chinese and Thai Stir and Wok Fry everything can be tasted here. On the other hand, at West View, the flavours of the world are consolidated under the same roof. It specializes in bar and grill and offers a wide range of meats, poultry, seafood and vegetable, served in traditional Western styles.

Pala is Kolkata’s largest pillar-free hotel ballroom which is named after the grand Pala dynasty. The hall can accommodate as many as 750 people and is fully equipped with audio-visual facilities. The hall can be used to organize events ranging from banquets, corporate gala dinners, exclusive private luncheons, wedding celebrations, conferences, symposiums etc.

To celebrate important occasions of life under the sky, the Sunderbans Lawns is the perfect place. It is a sprawling, richly landscaped garden which can be customized for individual events.

The Kaya Kalp is a delightful retreat from the weariness of day-to-day life. You can awaken your body and soul at the Kaya Kalp with the traditional massages and other treatments.